If you have a Wii, but don’t have the homebrew channel installed, fear not! You can still get SD Remix Lite onto your memory card with only an SD card.

Before you get started you’ll need:

On Windows, after connecting your SD Card to your computer, you can go to “Computer” or “My Computer”, right click on your SD Card and select “Properties”. It will bring up this window:

The part circled, and it should say “FileSystem: FAT32” or “FileSystem: FAT16”. If it doesn’t, you’ll need to reformat it (this will wipe everything on your SD Card, so back up everything you want to save to somewhere you’ll remember on your hard drive). To reformat, you should go back to “My Computer” or  “Computer”, right click on your SD Card, and select “Format…”. You should get this window: 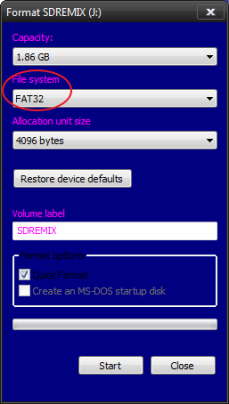 Make sure the portion circled says “FAT32” or “FAT16” (preferably FAT32). Then click “Start” to reformat your SD Card. Again, this will delete everything on your SD Card, so make sure you’ve backed up any important files.

In order to use LetterBomb, your Wii’s System Menu must be at Version 4.3. WiiBrand works with a variety of versions. To check your version, go to your Wii Options from the Wii’s main menu, like so:

Then go to Wii Settings: 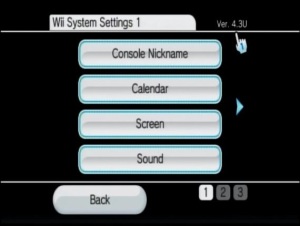 Step 3: Get the MAC address of your Wii

To find your Wii’s Mac address, you’ll need to turn on your Wii and go to the Wii Options:

Then go to Wii Settings:

Then go to the second page and select Internet:

From there, select Console Information:

The next screen should have your MAC Address and possibly your LAN Adapter MAC Address. Your Wii’s MAC Address is the first one, simply labelled “MAC Address”.

If you want to keep this data for later, you’ll need to rename it. We recommend renaming it to “private_old”.

If you have version 4.3, you should use Letterbomb, since it’s marginally easier to do. If you don’t have 4.3 or if the Letterbomb website is down, you can still use WiiBrand pretty easily.

To use Letterbomb, go to http://please.hackmii.com/. Once there, select the correct System Menu Version region (one of the radio buttons). Then, you will need to input your Wii’s MAC Address into the text boxes provided. Make sure “Bundle the HackMii Installer for me!” is UNchecked, as we will not need it. Fill out the captcha and you can cut either the red wire or the blue wire (it doesn’t matter). At that point, it’ll give you a file to download called “LetterBomb.zip”. Download it to somewhere on your hard drive. It should contain a folder called “private”. Copy this to the root of your SD Card.

To use WiiBrand, download the WiiBrand Launcher from this web page: https://gbatemp.net/threads/wilbrand-launcher.328943/
Extract the exe and two dlls to the same folder on your hard drive. Launch Wiibranch_Launcher.exe. You’ll get the WiiBrand Launcher window. Enter in your Wii’s Mac address, which region it is, the Firmware version number (which is the same as the System Menu version number), make sure “Bundle HackMii installer [version] for me” is UNchecked, as we will not need it. Also, check “Copy directly to device”. From the drop down next to “Copy directly to device”, select your SD Card. Once that’s done, click the button with the green envelope with the pink bob-omb. Once it is done, there should be a message below the button that says something like “OK! Data copied to device ‘[SD Card Drive Letter]:\”.

Whether you used LetterBomb or WiiBrand, your SD Card should now have a “private” folder.

If there isn’t one already, create a folder called “MCBACKUP” at the root of your SD card, making sure all the letters are uppercase.

The downloaded file should be a zip file with a .gci file inside. Copy the .gci file to the “MCBACKUP” folder.

Step 7: Run GCMM on your Wii

Insert the SD Card into your Wii’s SD Card Slot. Then turn on your Wii. From here, go to the Wii Message Board.

From there, navigate either to today, yesterday, or tomorrow until you find a message that looks like a colored envelope. If you used WiiBrand, it will be a green envelope, and if you used Letterbomb, you’ll see a red envelope, like this:

If you already have an existing SSBM save file, installing SD Remix Lite to your memory card will overwrite that save file. Fortunately, you can backup your save file to restore it later. If you want to make a backup of it, you may do so at this time.

To do the backup, choose “Backup”, which is “Y” on the GameCube controller and “-” on the Wiimote.

It will ask you which slot to read from. Pick whichever slot your memory card is currently in.

Step 8: Restore the SD Remix Lite save file onto your memory card

We now want to choose “Restore”, which is “X” on the GameCube controller or “+” on the Wiimote.

It now asks you to choose a memory card slot to restore to. Choose whichever slot has the memory card in it.

There should be at least one save file called “01-GALE-SuperSmashBros0110290334” (or “01-GALP-SuperSmashBros0110290334” for our PALs in parts the world). If you’ve made a backup, there will be multiple with the same name. You can double check the dates of each save file, but the SD Remix Lite save file is likely to be the last one listed of that name. Highlight that one and press “A” to start restoring.

When it is done restoring, it should give you a message saying it is done. Congrats, you now have SD Remix Lite on your memory card! If your SD Remix Lite is behaving oddly, such as crashing or some of the expected changes not appearing, move on the Troubleshooting below.

Some players have had issues with GCMM not correctly writing to certain types of memory cards, generating corrupt SSBM saves that either don’t work at all or only partially work. This mostly affects off-brand memory cards, especially ones that have been through a lot of use. If you’re running into issues with your memory card, you might want to try your other memory cards, if you have some. The best memory cards tend to be the big brand memory cards, such as Nintendo, MadCats, and Nyko. I’ve also personally tested that this KMD memory card seems to work (and it’s pretty cheap), but that might be because I tested it while it was brand new.