Yoshi, he’s that green dinosaur always seen with Mario and company, isn’t he? He’s quite a charming critter with his distinguished fashion sense. Since when did dinosaurs wear shoes anyway?

Ehm, Yoshi has received quite a few changes that will appeal to the diehard dino-fan. Even in SD Remix, Yoshi remains one of the most difficult characters to play. But Yoshi has a few tricks that may surprise you. 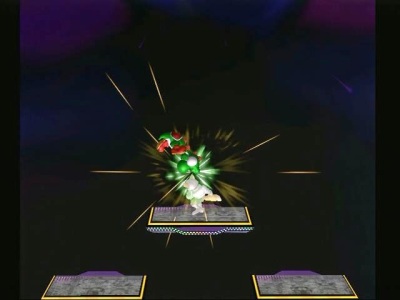 Forward Aerial has very little start-up, so get to clobbering!

Firstly, Yoshi now has the undisputed best aerial mobility in the game. For a strange green dinosaur that waddles his legs about to propel his body, he’s quite nimble! Have fun chasing after foes and baiting them into attacks just to evade at the last moment.

Up Smash is active for the entirety of the head swing, so Yoshi can hit foes in front of him. It packs a lot of heat, so do be careful where you stand.

Place trust into your shoes and leave the rest to destiny.
Neutral Air has a hitbox over Yoshi’s foot. No doubt the concern of every Melee player since the turn of the century, the quirk has now been remedied.

Back Air connects more consistently due to numerous knockback changes. Combine this with Yoshi’s superior aerial mobility, and Yoshi will now deal more damage and pain than before.

Yoshi’s grab functions a little differently. Yoshi can now capture airborne opponents with any section of his tongue, and the hitbox lingers! 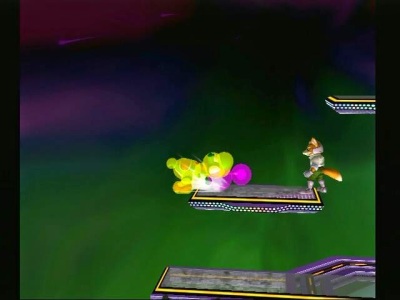 Standing grab has much less start-up compared to the original.

Running grab has a hitbox inside Yoshi’s mouth.

Yoshi’s Neutral Special Egg Lay makes foes susceptible to more damage while inside the egg compared to before. Furthermore, the opponent is only invincible for 1 frame after escaping the egg, compared to 14 frames in Super Smash Bros Melee. If you anticipate them making their escape, you can follow up with a move as they pop out!

Yoshi’s Side Special Egg Roll has some horizontal momentum in the air, and no longer puts Yoshi into free fall state. Use it after being knocked away high from the stage before using your double jump. Doesn’t it feel good to be alive?