Roy is a young prince hailing from the continent of Elibe who desires peace seized by a war of terror.While Roy shares Marth’s moveset, the two are very different fighters. Whereas Marth’s attacks are stronger at the tip of his blade, Roy’s sword is strongest in the very middle…But you already knew that, didn’t you?

Roy returns in Melee: SD Remix as a familiar character with many of his most glaring faults gone. Even the tip of his blade packs a punch now, allowing for wider breadth of follow-ups to his attacks.

Roy’s concept in vMelee suffered from poor implementation. While his moves offered little knockback, suggesting a character with intricate combo strings, the Melee engine itself had no support for that. Melee emphasized short combos of strong knockback moves. This leaves Roy with unsafe ‘poke’ moves and high risk-low reward KO moves. A weak character.

That’s a good look for you, Fox.
His Melee gameplan packs a punch in SD Remix. The tip and hilt of his blade now deal more damage, have adjusted knockback, and are safer and more rewarding than before. His Neutral Aerial and Back Aerial now can send a devastating KO to careless opponents. His Down Smash isn’t to be taken lightly either!

Next, we’ll touch base on Down Aerial. It used to be a measly Meteor Smash seen once in a blue moon. Not anymore!

The non-sweetspot hitboxes will Meteor Smash opponents, allowing you to follow-up with a Smash Attack or shift the momentum in your favor. Use it to its fullest potential to maximize your gains.

Meteor Smash hits let you follow-up, but seldom KO foes.
Yet if you land the sweetspot… 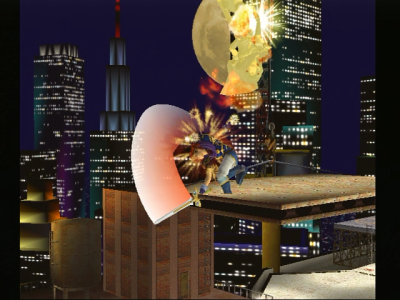 BOOM! A ferocious flame engulfs your enemy!
The sweetspot of Down Aerial will spike your opponent, akin to Marth’s Down Aerial sweetspot. The difference is the pure strength of Roy’s sweetspot can KO opponents even on the ground. It’s quite a sight!
Now let’s not forget everyone’s favorite move: Up Smash!

What the?! The move pulls inward?! 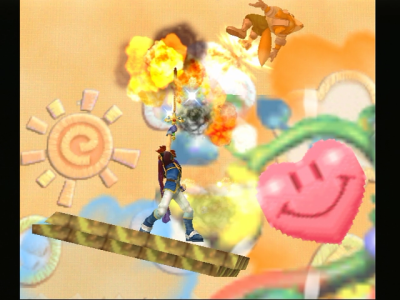 BOOM! The pyrotechnics really had a field day on this one…
Roy’s feet now have hitboxes that vacuum the opponent into the Sword of Seals. The move is still relatively slow, but you could say it will consistently blow your opponent away.
<Side Special Move: Double-Edged Dance>

Better luck next time!
Huh? It appears that Roy’s Side Special ending attacks are equally strong at the tip, center, and hilt?
Don’t fret too much about it. It’s the small blessings that make the difference. Or so they say.